ATTENTION:  We DO NOT SELL RIFE machines or give advice on frequencies.  We only provide in office treatment using our equipment 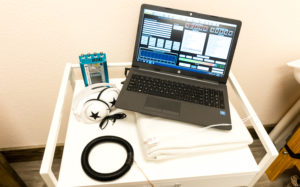 Royal Rife is one of the most brilliant and innovative scientists who you probably never heard of. He was born in 1888 and died in 1971. After studying at Johns Hopkins, Rife developed technologies which are still commonly used today in the fields of optics, electronics, radiochemistry, biochemistry, ballistics, and aviation.

He received 14 major awards and honors and was given an honorary Doctorate by the University of Heidelberg for his work. During the 66 years that Rife spent designing and building medical instruments, he worked for Zeiss Optics, the U.S. Government, and several private benefactors.

Rife’s inventions include a heterodyning ultraviolet microscope, a microdissector, and a micromanipulator. When you thoroughly understand Rife’s achievements, you may well decide that he has the most gifted, versatile, scientific mind in human history. By 1920, Rife had finished building the world’s first virus microscope. By 1933, he had perfected that technology and had constructed the incredibly complex Universal Microscope, which had nearly 6,000 different parts and was capable of magnifying objects 60,000 times their normal size. With this incredible microscope, Rife became the first human being to actually see a LIVE virus, and until quite recently, the Universal Microscope was the only one which was able view live viruses. The Rife microscope can see the activity of living viruses as they change form to accommodate changes in environment, replicate rapidly in response to carcinogens, and transform normal cells into tumor cells.

But how was Rife able to accomplish this, in an age when electronics and medicine were still just evolving? Here are a few technical details to placate the skeptics… Rife painstakingly identified the individual spectroscopic signature of each microbe, using a slit spectroscope attachment. Then, he slowly rotated block quartz prisms to focus light of a single wavelength upon the microorganism he was examining. This wavelength was selected because it resonated with the spectroscopic signature frequency of the microbe based on the now-established fact that every molecule oscillates at its own distinct frequency. It took Rife many years, working 48 hours at a time, until he discovered the frequencies which specifically destroyed herpes, polio, spinal meningitis, tetanus, influenza, and an immense number of other dangerous disease organisms.

Royal Rife discovered that every virus, bacteria, parasite or other pathogen are particularly sensitive to a specific frequency of sound and can be destroyed by intensifying that frequency until it literally explodes, much like an intense musical note that can shatter a wine glass.

The atoms that come together to form a molecule are held together in that molecular configuration with a covalent energy bond which both emits and absorbs its own specific electromagnetic frequency. No two species of molecule have the same electromagnetic oscillations or energetic signature. Resonance amplifies light in the same way two ocean waves intensify each other when they merge together.

The result of using a resonant wavelength is that micro-organisms which are invisible in white light suddenly become visible in a brilliant flash of light when they are exposed to the color frequency that resonates with their own distinct spectroscopic signature. Rife was thus able to see these otherwise invisible organisms and watch them actively invading tissues cultures. Rife’s discovery enabled him to view organisms that no one else could see with ordinary microscopes.

Royal Rife had identified the human cancer virus first…in 1920! Rife then made over 20,000 unsuccessful attempts to transform normal cells into tumor cells. He finally succeeded when he irradiated the cancer virus, passed it through a cell-catching ultra-fine porcelain filter, and injected it into lab animals. Not content to prove this virus would cause one tumor, Rife then created 400 tumors in succession from the same culture. He documented everything with film, photographs, and meticulous records. He named the cancer virus ‘Cryptocides primordiales.’

He used the same principle to kill the virus by increasing the intensity of a frequency which resonated naturally with these microbes. Rife increased their natural oscillations until they distorted and disintegrated from structural stresses. Rife called this frequency ‘the mortal oscillatory rate,’ or ‘MOR’, and it did no harm whatsoever to the surrounding tissues.

In the Fall of 1990, two researchers, Drs. William Lyman and Steven Kaali, working at Albert Einstein Medical College in New York City made an important discovery. They found that they could inactivate the HIV virus by applying a low voltage current to HIV infected blood in a test tube. They applied a direct current to the electrodes and found that a current flow in the range of 50-100 microamperes (uA) produced the most effective results. Practically all of the HIV viral particles were adversely affected while normal blood cells remained unharmed. The viral particles were not directly destroyed by the electric current, but rather the outer protein coating of the virus was affected in such a way as to prevent the virus from producing reverse transcriptase, a necessary enzyme needed by the virus to invade human cells.

Unfortunately it appears that there was a targeted campaign against Rife and his work, a lot of his instruments and detailed research notes went missing, burned, stolen or vandalized.

You can read “The cure that worked” for free using this link.  https://cdn.website-editor.net/87b497e2dbe543258766bacfe13a95c9/files/uploaded/TheCureThatWorked.pdf

Amongst other information, you will find that in 1985 The Sloan-Kettering Cancer Institute found the Rife-Livingstone-etc. organism (virus) in ALL blood cultures of cancer patients. They conclude that the organism comes from outside contamination and bury the report.

One day, the name of Royal Raymond Rife may ascend to its rightful place as the giant of modern medical science. Until that time, his fabulous technology remains available only to the people who have the interest to seek it out.

Sound therapy is the practice of using audio tones and vibrational frequencies to repair damaged tissue and cells within the body. It works on the basis that all matter is vibrating at specific frequencies, and sickness, disease, depression and stress causes human beings to vibrate at a lower frequency. Using Sound Frequencies that promote healing, and vitality will encourage DNA to repair themselves, several scientific studies have been conducted on the potential healing benefits of audio sound frequencies

Sound Therapy is a new alternative therapy which is researching the effects of low frequency sound and vibration on human health and wellness. Researchers who have studied the effects of frequency, sound, light, color, and vibration include Royal Rife with his Rife Frequencies, Lakhovshy’s Multiple Wave Oscillator (see our Multi Wave Oscillator page) , Robert Monroe with audio binaural beats, Dr. Hans Jenny and Dr. Guy Manners with their work on Cymatics, Vladimir Gavreau’s sonic weapons using infrasound, and Tomatis who associates learning ability with listening ability and clear hearing.  For example, the Bulgarian Psychiatrist, Gorgi Lazanoff was able to show an increased capacity for learning, super learning, if you will, by playing Baroque music (1700’s Bach, Vivaldi, Telemon, Handle) and having his students breathe in rhythm with the beat.

Research has shown that when we are deprived of certain light frequencies, we can become sick. One of the most fascinating scientific facts to emerge recently is that sound behaves in a similar fashion to light. In other words, sound and light act like vitamins and minerals in our body. Most people are deficient in certain tones and this is traced when the human voice is recorded and monitored.  Recent experiments indicate that one of the most powerful ways to heal the individual is to play back the missing frequencies at a low octave which corresponds to brain wave frequencies.

Tinnitus : A two year study supported by the Klaus Tschira Foundation in Germany proved that sound therapy was able to significantly reduce the symptoms of chronic tinnitus. Not only did sufferers report a significant decrease in their symptoms, MRI images of the subject’s brains during treatment showed that sound therapy was able to activate certain areas of the brain that researchers believed were responsible for the unpleasant symptoms associated with tinnitus.

Researchers in the UK have found that sound wave therapy successfully cured 90% of male patients that were suffering from prostate cancer, and did so without any harmful side effects whatsoever. Dr Hashim Ahmed  led the study at University College London Hospitals NHS Foundation. 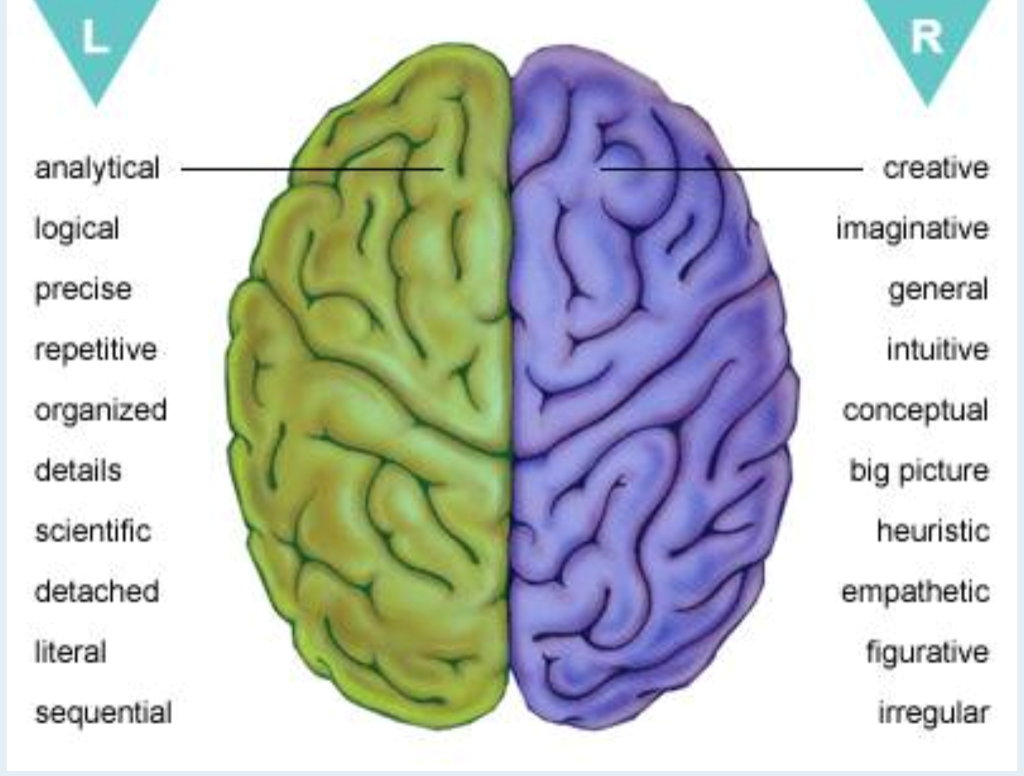 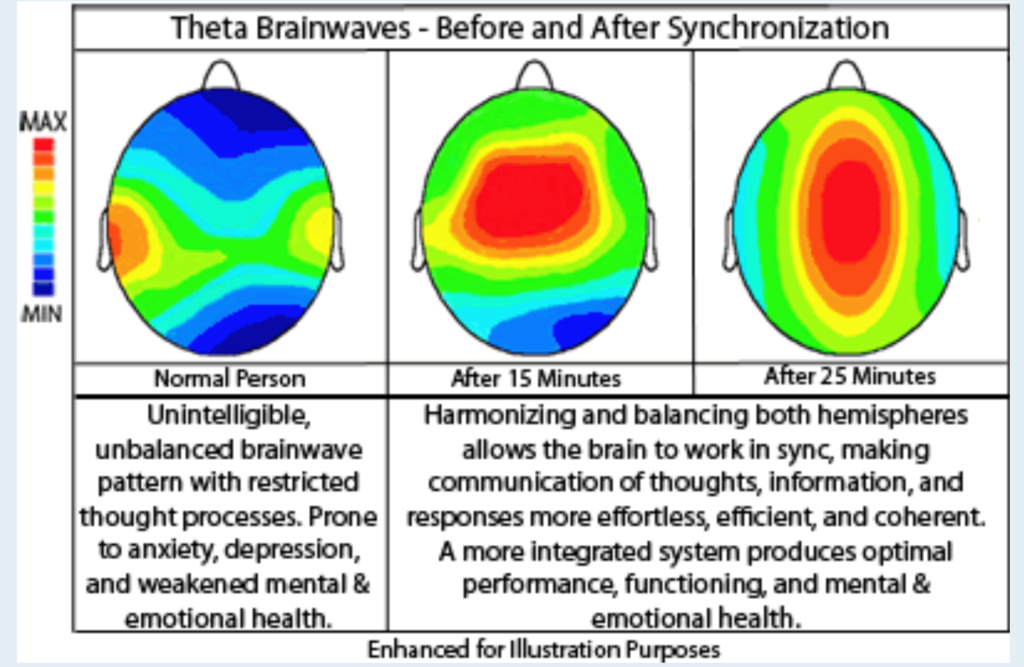 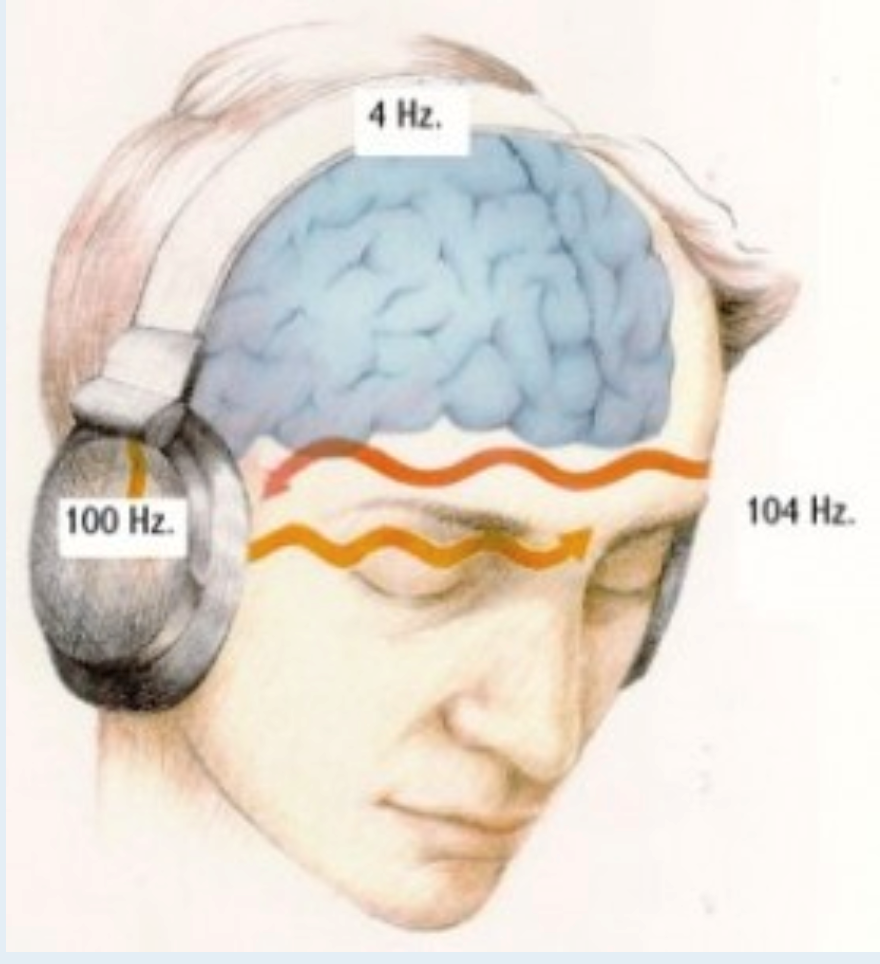 The whole-brain person is balanced and usually inconspicuously modest. S/he does not suffer from the extreme tendencies of a hemisphere dominant person. S/he has emotions and knows their origin. S/he is much more conscious of her/his motivations. Unconscious biases are much less descructive then in brain hemisphere domint persons. S/he is creative and logical at the same time, and creativity emerges from utilizing all mental capacities.

Banquet (1973) suggested that during meditation a greater equalization of the functioning of the hemispheres tends to take place. This relative shift in hemispheric dominance (from left-brain dominance to whole-brain dominance) may result in therapeutic effects which are likely to enhance mind-body integration and overall improvements in physical and emotional health.

But how can we achieve whole brain synchrony without needing to become involved in the prolonged practice of meditation and meditative exercises? Can such states be induced and maintained by the use of technology?

Pain: You’ve probably known or heard of someone having a car accident and not feeling a thing, even though they might have been pretty banged up. This is because the brain releases powerful pain relieving endorphins into the body during a trauma. TBSW (Tri Neural Balanced Sine Waves generator) waves allow you to safely control these endorphins to get rid of pain naturally, by using special frequencies and waveforms. 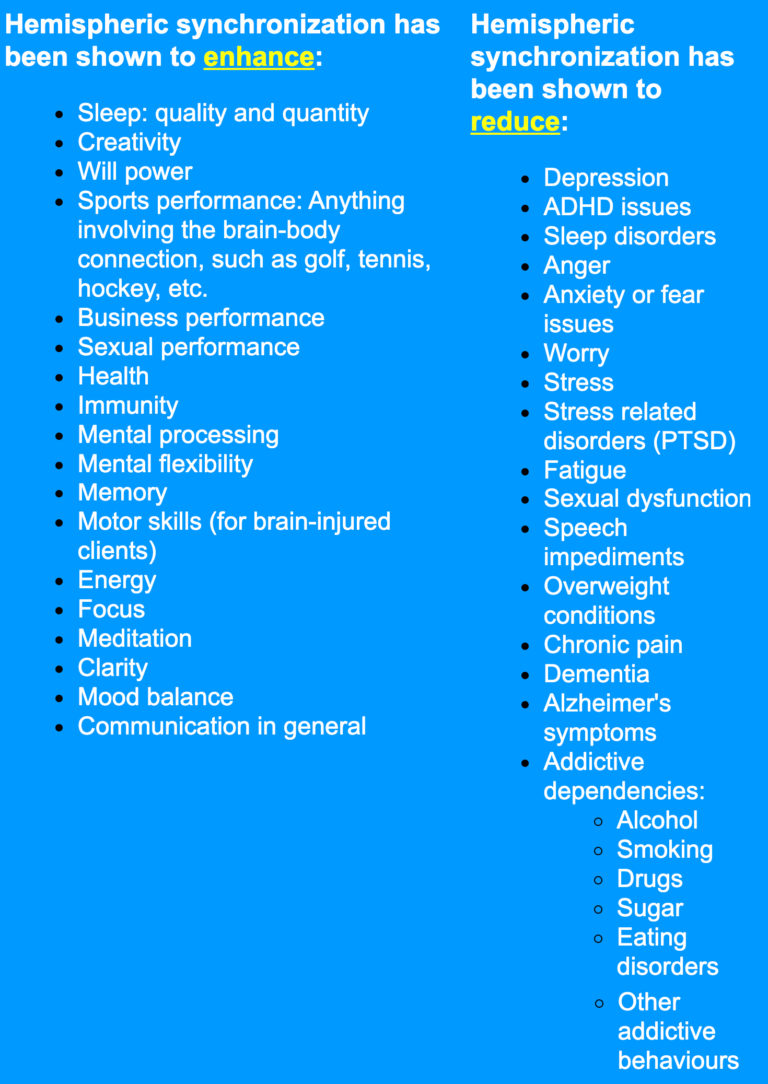 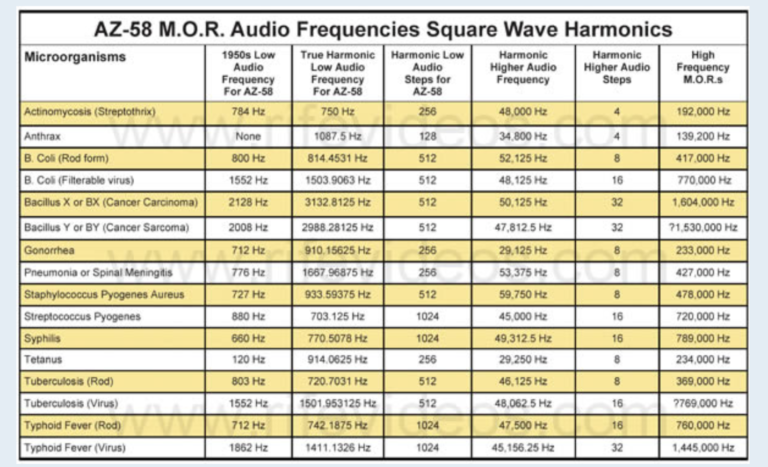 Like most everything else, not all Rife machines are created equal.  Our equipment has hundreds of available frequencies and the ability to use several harmonized frequencies in same session to decrease treatment time.  We also use the Hoyland Generator which produces harmonic sideband frequencies. It also uses several attachments to deliver the treatment including headphones for sound frequencies.

It would take too much space to name all the conditions and infections, including cancer, where Rife/Sound therapy technique could be helpful.  Here are a few:

Disclaimer: To comply with FDA requirements we need to inform you the fact that a lot of people have had tremendous results does not guarantee that you will have the same results. Also, if you have a serious medical condition, this use of this technology should not replace any competent medical advice you are currently receiving. Our experiences have been that most people will use this technology while continuing to visit their usual/normal medical professionals